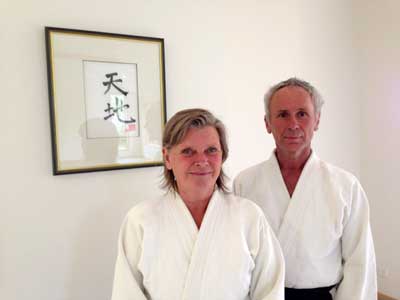 Tenchi Farm Aikido Mountain Dojo
Meander Tasmania Martin Bratzel and Bodhi Mc Sweeney
Martin has been practicing Aikido since 1980 including an extensive time at Hombu Dojo 1984-87. His love for nature brought him to Tasmania where after 25 years he realised his dream of building a Dojo Martin has been working in the outdoors as a guide and in Wilderness Therapy for many years.
As a keen gardener he provides the freshest of produce for the table.
Bodhi came to Aikido in 1992 and fell in love with the art. She has a varied history with food working professionally and feeding friends and family. Her inspirations come from the farm garden's seasonal offerings.
Both have had the privilege of training with Tony Smibert Shihan as a part of a small but dedicated Aikido group in the local Sugano Dojo in Deloraine. Tony is a friend and enthusiastic supporter of Tenchi Dojo.